SHORT SYNOPSIS FOR THE TIME POOR: A detailed essay appearing in The Atlantic about speech-codes and the slide of college campuses into increased regulation of people’s behaviour, activities, and conversation. 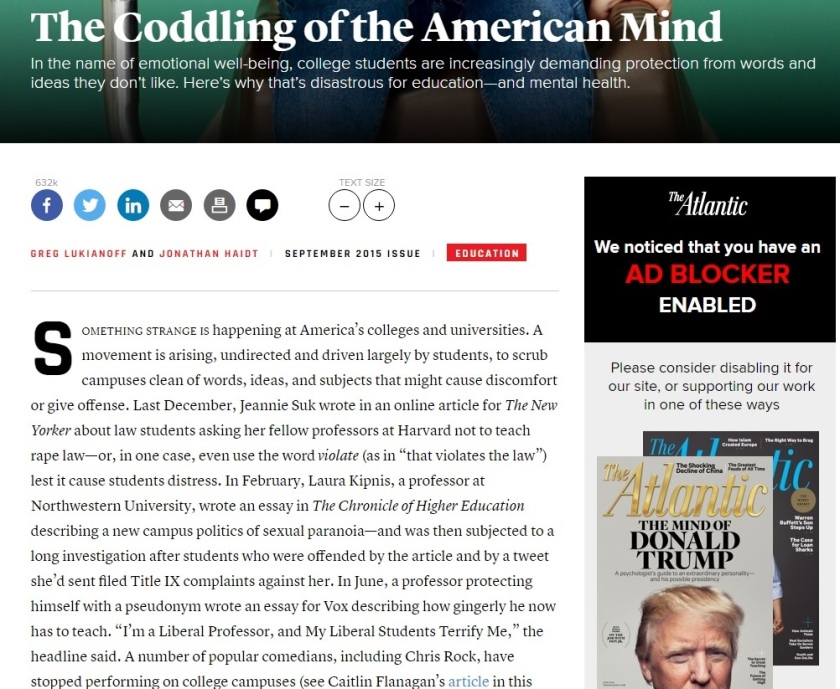 This article presents a very good analysis of the growing intolerance present on college campuses and the efforts by student groups to regulate both speech and conduct lest anyone should be “offended”. Hungry for control, anyone who does not submit to the demands of these groups is labelled racist, sexist, or bigoted (as chilling in modern parlance as the cry of “witch!” must once have been) and subject to incredible vilification. The article documents the careers trashed, the reputations permanently damaged, and the jobs lost for the sake of inadvertently causing “offence”.

It is tempting to dismiss this as madness isolated to the bubble-world of college campuses. However, this is a worldwide phenomenon. Although the article looks mostly at American college life, the same rush to control people is being replicated around the world with a number of notable examples of this behaviour recently arising at universities in the United Kingdom. Moreover, if history teaches us anything, it is that ideas that gain credence among the intellectual elites of a community eventually filter all the way through the social structure. That is why it is now possible to hear from the mouths of the most uneducated people the same pop-psychology theories that were current in the 1980’s and 1990’s. People who have scarcely read a book, who have hardly spent any meaningful time at study, and whose life has been a trajectory of criminality or poverty, somehow have acquired these ideas which they put into service to alleviate their culpability for their actions. Ideas which yesterday were the sole province of social sophisticates, today have become the mental furniture and worldview of many.

This new generation of political-correctness-on-steroids has developed a root-and-branch theory to support their efforts to control speech. They equivocate any exposure to challenging academic material with Post-Traumatic Stress Disorder. There is also the concept of trigger warnings, micro-aggressions, and even Pre-Traumatic Stress Disorder. All of this portends a new era in human interactions that will not end at the boundary fence of college campuses. Eventually these concepts will spread through the wider community and we will have to deal with it in one form or another. We are facing a future era in which people demand to be free from any idea, words, photographs, or material that makes them uncomfortable.

It is not difficult to project how this will play out, or what it means for Christians and the witness of the Church. After all, there is nothing more offensive than the offence of the cross. And many Christians in the West – at least Christians who are properly evangelical and thoughtful, and who understand society through the same lens as our Blessed and Infallible Lord – can see the writing on the wall. Persecution of believers is inevitable. It always has been. The Church is relieved from persecution only ever for a season. And now, in 2016, as element after element; brick after brick goes into the edifice of a new secular tyranny, one can only marvel at how thoroughly absurd it all is, yet how sinister and cruel. Secularism and godlessness can only terminate in absurdity, rank hypocrisy, and the smashing of what is true and properly moral, good and righteous. It has a warm fuzzy exterior, but hides blades of steel. For it means to dispossess you, dear Christian, of your livelihood if you dare stand against the currents of the age. It means to imprison you, fellow believer, if you run afoul of a hate-speech code in the cause of Christ.

The inerrant St. Paul understood this long ago. “Professing themselves to be wise, they became fools” – and when one reads this article, there is ample evidence for that folly corresponding to the conviction that this is high wisdom.

Some examples of incredible follow from the article include a student who objected to the rowdy behaviour of African-American women who were making a disturbance at night, and used a common epithet for noisy people from his native Israel. This resulted in a charge. Apparently the words he used were more egregious than preventing other people from sleeping:

Among the most famous early examples was the so-called water-buffalo incident at the University of Pennsylvania. In 1993, the university charged an Israeli-born student with racial harassment after he yelled “Shut up, you water buffalo!” to a crowd of black sorority women that was making noise at night outside his dorm-room window. Many scholars and pundits at the time could not see how the termwater buffalo (a rough translation of a Hebrew insult for a thoughtless or rowdy person) was a racial slur against African Americans, and as a result, the case became international news.

Claims of a right not to be offended have continued to arise since then, and universities have continued to privilege them. In a particularly egregious 2008 case, for instance, Indiana University–Purdue University at Indianapolis found a white student guilty of racial harassment for reading a book titled Notre Dame vs. the Klan. The book honored student opposition to the Ku Klux Klan when it marched on Notre Dame in 1924. Nonetheless, the picture of a Klan rally on the book’s cover offended at least one of the student’s co-workers (he was a janitor as well as a student), and that was enough for a guilty finding by the university’s Affirmative Action Office.
These examples may seem extreme, but the reasoning behind them has become more commonplace on campus in recent years. Last year, at the University of St. Thomas, in Minnesota, an event called Hump Day, which would have allowed people to pet a camel, was abruptly canceled. Students had created a Facebook group where they protested the event for animal cruelty, for being a waste of money, and for being insensitive to people from the Middle East. The inspiration for the camel had almost certainly come from a popular TV commercial in which a camel saunters around an office on a Wednesday, celebrating “hump day”; it was devoid of any reference to Middle Eastern peoples. Nevertheless, the group organizing the event announced on its Facebook page that the event would be canceled because the “program [was] dividing people and would make for an uncomfortable and possibly unsafe environment.”