In the hands of secularists and unbelievers, the austere Christian observance of Christmas has mutated into a vivid expression of spiritual decay. It proves that while Western civilisation may have prosperity to the rafters and an extraordinary quality of life, it has obtained these things in a truly Faustian bargain. To get them, it has sold away eternal meaning, temporal purpose, moral significance, and existential depth.

Christmas is a season for frantic gift purchases, drunken office parties, quaint Victorian tropes (like stockings), gluttony, and schmaltzy movies about saving Christmas and Santa Claus. In fact, this jolly deliveryman from the North Pole has become a cause célèbre in his own right. The extraordinary lengths that parents go to in order to convince their children of Santa’s reality range from cookie crumbs on the mantelpiece to the planting of elaborate evidence (footprints, torn pieces of red cloth, and so on). 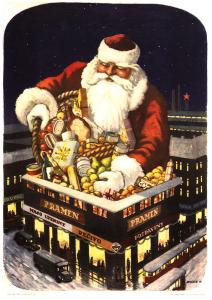 Indeed, an aggressive debate now rages over telling children the truth about Santa. Each year, some child somewhere is told that Santa is fictional and their anguished tears are reported in the tabloids, dripping with pathos. My favourite story happened a few years ago. During his annual Christmastide talk to a group of primary school children in his parish, a Church of England vicar let slip that Santa was not real.

No doubt astonished that any clergyman of the Church of England would say anything that was not vague and wishy-washy, the children ran home to tell their parents. Rather than accepting the reality that eventually someone, somewhere will tell little Chanel or London Jr. that it was a bit of make-believe, the parents responded with extreme anger. How dare someone disabuse their child of the falsehoods so painstakingly inculcated into them! They were far more upset about Santa, one suspects, than they would ever be about the promotion of disbelief in Christ.

The most amusing part of the story was the response by the church. The Church of England, in its ceaseless quest to offend nobody and thus enter total irrelevance, was put in the unenviable position of needing to defend the nativity of Christ as the actual historical Christmas account, while concurrently appearing not to condemn the fantasy character that had supplanted the Lord in the affections of the parents.

Fictitious stories are serious business to a lot of people it seems. This nonsense has been taken so seriously that The Atlantic put together an article some time ago that featured professional-looking graphs depicting the age when people lost their faith in Santa.

Of course, this is what happens when unbelievers want to inject a transcendent vibe into an annual celebration. They either must seek it in extreme consumption – for what could be more transcendent in a materialistic culture than stuff – or they must seek it through a saccharine sentimentality related to childhood. Transcendence is found in the merry eyes of a child, sitting in front of the TV, watching a Christmas movie, gobbling M&M’s, whilst excitedly waiting for an imaginary fat man to deliver parcels of DVD’s, video game consoles, and remote-controlled drones down the chimney. Only this can truly capture that special emotion known “the spirit of Christmas”.

As silly and sad as it may be, we can hardly blame unbelievers for their parasitic simulacrum of Christian joy. Not for them the indescribable wonder of the birth of God in the flesh, and the lowly manner in which he was born that he might seek and to save the lost. Not for them the joy of confessing the Messiah as Lord and Master. Not for them the overwhelming gratitude at being chosen by God – though unworthy – and the grateful ecstasy at having value and significance in the eyes of God. “God sent the Messiah into the world for me – a rebel who has given God nothing – and yet he still came for me!” Not for the unbeliever the relief and release of sins forgiven, of a cosmic sense of belonging to the household of faith, to the family of God.

Thus, let us put aside the now-traditional lamentations from Christians about the loss of the meaning of Christmas. What else do we expect from unbelievers? Why is anyone surprised when unbelievers act like unbelievers?

The mourning over the loss of a religious Christmas season really amounts to tiresome and redundant hand-wringing. In the process of this emotional bloodletting, Christians get caught up on a mere tradition. They become evangelical about divisions between the world and the Church that are inevitable and healthy. There should be a vast and stark difference between a Christian Christmas and the celebrations of the pagans.

For Christians, Christmas ought be a sombre reminder above all that Jesus Christ is the centrepiece of Time. While the unbelieving world thinks they need not reckon with him and can safely erase him from history or reduce him to a footnote, the birth of the Lord is an annual reminder that the human story is God’s story. He is in control of it. And events are marching forward in complete accord with God’s eternal plan and timetable. We can rejoice because we have passed a key milestone. The Messiah has come, and just as the Prophets taught, the everlasting gospel has flowed out of Israel – the rivers of salvation – as the news is spread throughout the earth. Christ really walked on the earth, drank the water, breathed the air, performed miraculous signs, and taught living truth. His one perfect life has left a mark that will never, never fade.

But if Christmas is the story of the Lord’s first advent on that starlit night so long ago, if it tells us the glorious message of the arrival of the King through a quiet birth to an unremarkable couple in the lonely countryside of Israel – it also is designed to underline his second advent. The return of the King with the fullness of his majesty.

Christmas is a time to acknowledge that the Messiah has come, and this same Messiah is going to come again. The purpose of his first advent was to begin the defeat of Satan, and to redeem for himself a new human race from under the curse of sin. The process of building his new creation started; the Second Adam is the progenitor and head of this race, as St. Paul so clearly taught us.

But, his second advent will be even more glorious than the first. Christ will come again to usher in the fullness of his Kingdom of which there shall be no end.

The nativity scene reminds us that we are living in the valley between two advents. Behind us lies the land of Egypt out of which the Church has had its exodus. We have journeyed together from the darkness of paganism, slavery, sin, and the unmerciful rule of Pharaoh. In front of us lies the Promised Land, and we are marching toward it. But St. Paul  tells us that we are not there yet: “Not that I have already obtained all this, or have already arrived at my goal, but I press on to take hold of that for which Christ Jesus took hold of me” (Phil 3:12).  We have not yet obtained the promised blessing, though it will certainly be ours in the grace and power of Christ.

Christmas is not just about looking back but also looking forward. If there was one advent, there will certainly be another. This is joyous news! The Messiah has come, and he is also coming again. He is shortly to appear. And on that day he will destroy the works of Satan; judge the living and the dead; redeem his people; and the praise of his glory shall never end.

The Determined Pilgrim in an Arid Land
Blog at WordPress.com.
Loading Comments...