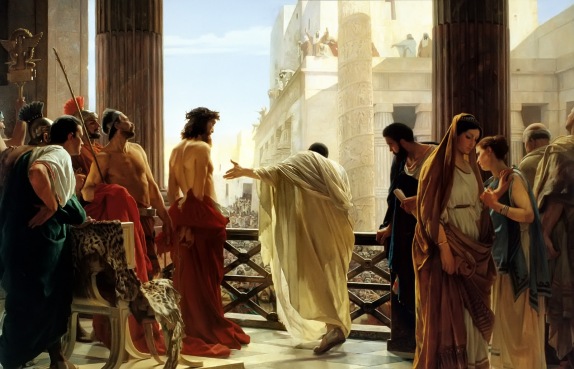 After the agonising night in Gethsemane, Jesus is arrested and eventually brought before the Sanhedrin. There he stands trial before the leaders of Judaism and by extension, the representatives of the Jewish people.

Contrary to Jewish legal precedent, this hastily assembled court meets at an unseemly early hour, and far from giving preference to acquittal, this court is designed to give the thinnest gloss of legality to a predetermined death sentence. St. Mark tells us that the “whole Sanhedrin was looking for evidence to put him to death”. In other words, this was a kangaroo court: prejudiced against the accused, presided over by biased judges, and one that ignored standards of justice in order to secure the desired outcome.

Or, perhaps more accurately still, this was an example of a legal process that has long characterised authoritarian regimes: the show trial.

The Lord had already given the parable of the vineyard and the wicked tenants shortly before so that the thoughtful reader can understand what is happening. Here the rightful King of Israel – the legitimate heir of the vineyard – is being usurped by envious and greedy men who want to hold onto their power, prestige, and the tradition-rusted, corrupted religion that had given them so much control over the people. The hour of darkness has come. St. Mark tells us that these rulers actively seek his blood. They want nothing more than to see him suffer a miserable and painful death.

It is worthwhile to note here how evil works. For there is nothing new under the sun. Then, as now, evil is expressed through institutions. Whether it is the Sanhedrin, or the modern parliament; whether it is the meeting of the High Priests and elders or a meeting of a corporate board, men and women generally do evil through institutions. Certainly, there are always some violent and cruel men at the bottom of the heap. There are the sharp-toothed bottom feeders who use actual force or inflict actual torments on others.

Yet even these violent men or women may, in some cases, be thought upon with mercy. The Lord prayed from the cross for the violent Roman soldiers who nailed him, “Father forgive them for they do not know what they are doing”. Not for the High Priests and the rest of the Sanhedrin. They knew what they were doing. And not for Pilate.

Although Pilate never drove any nails into Jesus or laid a single stripe on his back, the procurator was nonetheless quite aware that Jesus was innocent of any crime. He understood that the motive to judicially murder Jesus was solely to quench the outraged envy of the Jewish leadership.

Human beings create institutions. Nearly all of them are hierarchical, and all of them have both written and unwritten codes that govern them. Institutions can be very useful when they are overseen by benevolent and honourable men, but they are also susceptible to corruption and to the furtherance of unrighteousness. So often they provide a respectable covering, or a camouflaging skin, for distasteful behaviour: for greed, lying, manipulation, bulling, and propagating immorality.

When men and women gather together in an institution, they tend to work together to achieve corrupt purposes and promote the works of Satan in the world. We see this in corporations who successfully managed to suppress inconvenient information, as tobacco companies have done. Although many employees must have been made aware that they were promoting a dangerous product as documents were received, typed, circulated, filed, few spoke out against their companies in the heyday of the cigarette.

The cover-ups in government departments, the unbridled greed of corporate policies that often leave victims helpless in the face of a barrage of legal firepower, and the suppression of any Christian viewpoint in other circles points to the same corruption St. Mark documents on that cold night in the Judgement Hall. It is no wonder that ungodly activists who wish to remodel society in their own image are so quick to form groups, since propagating evil tends to be most effective when done in packs. Those who would advance God’s kingdom are often lonely men. The righteous are always outnumbered.

Institutions tend to be merciless, but merciless in a peculiar, paper-shuffling way. After all, Stalin, Mao and Hitler – who stand as history’s most vicious tyrants by dint of the sheer scale of misery and death they supervised – never killed anyone with their own hands. Hitler never gassed a single Jew; Stalin did not physically pillage the food from the Ukraine; and Mao never put a single bullet in anyone’s head. But, as St. Mark reminds us, guilt does not attach alone to those who perform deeds of evil, but to those who put the wheels in motion and use their positions to facilitate evil.

How do we stand firm, then, in a morally revolutionary age where institutions across society often seem irredeemably corrupt?

Jesus gives us the answer. Forsaken by his friends and delivered into the hands of his enemies, he stands (at first) silently like a sheep before his shearers. Their baseless accusations, distortions, and lies crash like water over his impassivity. Sometimes holding silence is necessary especially when it is clear that there is no point. One cannot reason with those who are determined to wield lies like a sword and who persist in their purposeful efforts to misunderstand or misrepresent us.

Yet Jesus also shows us the necessity of standing on the truth and declaring it. He did not hold himself aloof from suffering but shared it in full at the hand of unjust men. At the critical moment he did not resile from God’s truth. He stood firm, even knowing that his words would push the Sanhedrin over the edge and seal his crucifixion:

Again the high priest asked him, “Are you the Messiah, the Son of the Blessed One?”

“I am,” said Jesus. “And you will see the Son of Man sitting at the right hand of the Mighty One and coming on the clouds of heaven.”

One must stand upon truth at all costs. One must bear witness. In this case, Jesus bears glorious testament in that dark chamber to the reality that God had come; the Son of Man and the Son of God.

St. Mark reminds us that when evil manifests it is often through institutions of power. And small though a single Christian may be, the voice of faith rising from even the weakest believer can sound like a thunderclap in the eternal scheme of things. When we echo the words of Jesus and speak the truths which the world despises, we may suffer the cost at the hands of men and women combining in institutions of power.

But God, who is the ultimate Judge of all the earth, is not slow in keeping his promise. He will arise and do right. And those who followed the example of our Blessed Master will be vindicated and not fail to be rewarded in the life of the world to come.