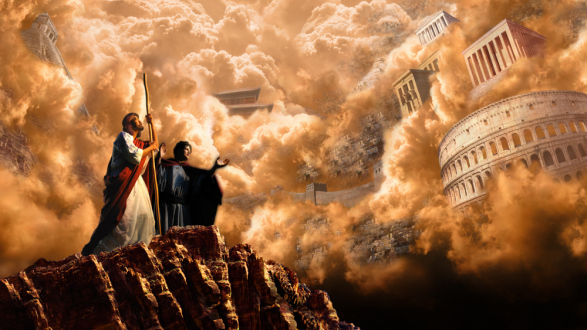 Immediately following his baptism, our Lord is led into a desolate place where he lingers for forty days and nights. After this time, Satan appears and the two engage in spiritual combat. The stakes could not be higher. Their battle echoes in eternity.

If Satan is victorious then God’s entire purpose is frustrated and the salvation of mankind is a failed project that must be swept into the cosmic trashcan. If the Saviour failed, then mankind would have suffer the same doom as the devil himself.

But if Christ emerges victorious – in the most weakened condition a man can reach without succumbing to death – then he is truly revealed as the Second Adam, the Man who is without sin and who does not submit to sin, unlike the first. Christ shows himself worthy to be the head of a new human race.

This incredible passage of scripture uncovers a glimpse of the deep and abiding spiritual realities that lay beyond the membrane of our seemingly ordinary existence. If we could only push aside these fragile, yet clinging surfaces that so captivate our minds, we would discover a spiritual dimension that is constantly interacting with, and influencing our experience of life. C. S. Lewis exposed some of this beautifully in The Screwtape Letters, but the account of Christ’s temptations does this best of all.

When reading this inspired passage of text one cannot help but raise the question: why does Satan bother to tempt our Lord at all? Surely he knows that Christ is fully God and fully man. Surely he knows it is futile?

The scriptures provide us with very little information about the psychology and motives of Satan and the demons (the fallen angels), but from what it does tell us we can deduce a few common-sense lessons.

Firstly, the fact that Satan and the demons are so concerned to corrupt and twist humanity and to subject us to the wrath of God, is surely a symptom of Satan’s contempt for humanity. For it is only a being who regards others as less worthy; less deserving than themselves that can engage in persistent and calculated cruelty toward them.

Most assuredly, Satan and the demons are cruel beyond measure. We need to recognise that Satan is not a sexually promiscuous fun-loving red devil, as the unbelieving world would vainly imagine and even celebrate. Rather he is the foul creature who worked to bring about the Holocaust. Who conspired to spark off the blood vendettas in Yugoslavia. Satan and his demonic host are behind every genocide and war; every torture chamber; every starved child; every dirty prostitute kicked around on the streets; every maltreated animal. All this, and more, are the products of Satan’s influence at one level or another.

Such cruelty is wedded to pride. Only the supremely prideful can inflict pain and harm on others without their conscience screaming. Satan possesses such pride, suggests C. S. Lewis, that it runs to anger and malice at the thought that God should both create and love humanity; we fragile race of beings formed from flesh and spirit. Satan attacks humanity with such vigour not because we are terrifically important, but because we bear the moral image of God. Unable to attack God himself Satan resorts to trying to efface, vandalise, graffiti, pollute, and twist the image bearers as his sole means of expressing his hatred of God.

Thus, when God assumes flesh and actually becomes man as part of his saving purpose, and when he faces down Satan – not in his divinity but by assuming our humanity – he demonstrates unimaginable power and unimaginable love.

One thought on “Reflecting on The Temptations of Christ”