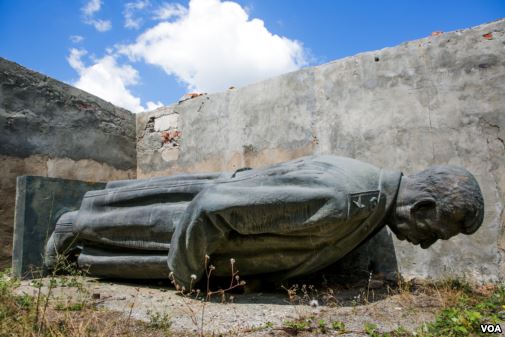 A statue of Stalin, once the feared ruler of millions, lies abandoned in the dirt. The ideology of communism which he used to justify his brutality has also experienced much the same fate.

One of the most remarkable aspects of the defeat of Germany during the Second World War was the absence of Nazis. Few people acknowledged having ever belonged to the party. Its leaders scattered and tried to bury their record. Many other Germans claimed no knowledge of government atrocities like the Holocaust. Subsequent interviews of civilians often have them musing along the lines of, “We didn’t want to dig too deeply into what was happening. We just thought the removal of Jews would be good for business.”

Even Herman Göring claimed not to been an active persecutor of Jews. He later said that he would never have supported the Nuremberg Laws and other anti-Semitic measures had he realised it would lead to the horror of the Holocaust. Despite this, Göring gave tacit support to the Holocaust, and was certainly complicit in robbing Jewish families of valuables. In other words, he might not have been so savagely anti-Semitic, but he knew how to make hay while the prevailing wind was blowing in a certain direction.

In Hitler’s Last Will and Testament, dictated in his bunker in Berlin in the final days of his regime, he said that he hoped Nazism would continue after his death and that “the struggle” of the German people would continue. By this, he meant their struggle against Jews and communism. Of course, Hitler did not get his wish. In fact the credibility of Nazism collapsed utterly as his regime was dissected and examined after the war.

Today, apart from a few cracked anti-Semites gathering in basements and getting a buzz from their Sieg Heils and salutes to portraits of a long-dead dictator, Nazism holds little attraction to people. The wearisome rallies, songs, racism, shouting, saluting, and its brutal, heartless use of human beings as mere instruments all seems horrendous, ridiculous, evil and sad.

In fact, although a few of my students express sympathy with some of the tenets of Fascism, none of them can understand the attraction of Nazism. None of them can fathom how such an extreme ideology could come to power, and then remain in power even when its effects on the population became increasingly deleterious. Although Nazism at its peak seemed to be unassailable and impregnable, beyond the power of a mere man to overturn, yet after a run of just twelve years it came to a bloody termination along with the group that gave rise to it. It demonstrates that human ideologies do not last forever. And when they fail – as they inevitably do – great is the fall of them.

This is an encouraging reminder for us in the 21st century. Our time is characterised by a rampant and radical secular ideology, ever more aggressively intent on toppling Christian beliefs and convictions and pushing them out of the public sphere. This is not new. Since the Enlightenment, a smorgasbord of ideologies have been part of the human experience in the West, and each of these have been variously hostile toward Christianity to different degrees. The current anti-theistic humanist secularism is more benign, (at least, in some ways), than the communism and fascism of the previous century. But it is an ideology nonetheless, with advocates who justify their programme with terms like equality and tolerance when we know that what they actually mean is unequal treatment, with some groups having rights that supersede those of other groups (e.g. Christians)

Ideologies always require government and institutional support. But if history teaches us anything, it is that ideologies that require institutional protection are fundamentally weak things. They can thrive only in an absence of any meaningful rebuttal. They can survive only when they can avoid being challenged. This is particularly true of the “social justice” shibboleths of secularism where only one viewpoint is ever presented in the professional news media; and where only one viewpoint is discussed, taught, spoken, and written. People who step out of line find a mob howling for punishment. Institutions then swing into action against the offenders, sometimes even to their own detriment. One university in my state rejected a large grant of money for a new research centre because a person was involved in the project who had made the claim that poverty was more important than climate change.

Transparently obvious truths cannot be publicly spoken when an ideology is in ascendancy. Questions cannot be asked. Things become unsayable. And the vast mass of people meekly fall into line, sensing the direction of the prevailing wind. Most people find it is altogether safer to capitulate or at least to keep quiet – as Orwell once wrote, to aim to be “free on the inside”. Those who openly chaff under the yoke of the ideology – usually Christians – pay the price for doing so. They are the bigots who must be maligned but never understood. Some activists would have people believe that the Christian faith is an evil, and that their version of godless secularism is mankind’s deliverance. Under such pressures, for the Christian faithful, sometimes it can seem as if the current ideology is permanent and unmovable.

But history teaches us that no ideology and no social arrangement lasts forever. All ideologies, by seeking to create a godless worldview and social practice, are shot through with cancerous contradictions that ultimately destroy the ideology from within. For example, communism could never be realised as Marx dreamed, because it was fundamentally unable to reshape human nature. It was a juvenile idea – that people would labour for the sheer betterment of others and not for their own advancement, and that in time government could thus wither away leaving a workers’ paradise. It was a simplistic childish notion in the extreme (as ideologies generally are), but one reinforced by a monstrous regimen of secret police, torture, massed surveillance, and barbed wire fences. The fences and walls have been a ubiquitous feature of communist regimes, whose leaders have always found it necessary to keep their people from escaping paradise.

Such contradictions led to falsified data until the Soviet Union was largely planning its economy on figures that were essentially fictitious. Everybody told lies. Atheism did not produce the seedbed of a moral life, and without God everything becomes morally permissible. The entire society participated in a great mass deception of social practice. The people themselves often came to recognise that their way of life was abnormal and that it should not be necessary to mouth platitudes or inflate production figures. They came to see their leaders as pathetic fools. Eventually, the simple human longing for a reasonable measure of prosperity overwhelmed the government machinery of fetid dreams, lies, propaganda, and a failed ideology.

Nazism was no different. Its entire existence was predicated on war. It never learned how to function in peacetime. In time, Hitler’s application of Social Darwinism to government and to society produced a brutal, radicalism that created so many enemies and so many foolish, childish decisions that the regime could not sustain itself. The same could be said for every other social ideology. All ideologies and schemes of mankind eventually run their course. They cannot survive because they do not find their origin in God, or predicated on his enduring word. Only the Church has survived century upon century, because it builds itself upon the everlasting Gospel of our Lord Jesus Christ.

So it will be for the current brand of secularism that is progressing to a soft form of tyranny before our very eyes. This secularism is also riddled with inconsistencies and contradictions. It too will last for a season before it will also collapse beneath the weight of the lies it perpetuates and the ungodly, false dream it is trying to live out.